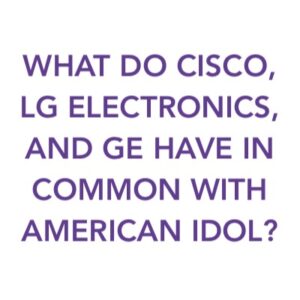 Tip 10 from Best Practices are Stupid. Keep in mind that this was written 12 years ago.

American Idol remains a popular television shows. Why?  Partly because it is entertaining and partly because the show is able to uncover previously undiscovered talent.

It is this latter reason why many organizations are employing the American Idol approach to innovation. Their objective is to uncover some truly amazing ideas or solutions that were previously hidden.

In the innovation space, these events are sometimes referred to as “innovation tournaments,” a term coined by Christian Terwiesch and Karl Ulrich from Stanford University.

With a tournament there is ALWAYS a winner, although it is not necessarily winner-takes-all.

Cisco, LG Electronics, and GE have all used the “find a winner” model as a way to develop ideas.

LG Electronics (2009) was looking to “design their version of the next revolutionary LG mobile phone.” Their tournament had 835 submissions from 324 individuals. They shared with me the fact that about 75% of the ideas were things they had thought of in the past; only 25% had innovative elements.

With tournaments, there is always a winner. But just because someone “wins” does not mean their idea is good or useful. I know from inside-information that the results are often less than stellar.

Instead of simply finding the “best” submission, look for the “right” solution. That is, don’t want to crown a winner for the sake of naming a champion. Instead, find workable solutions to a real and specific business problem.

Think of these as contingency-based, value-priced challenges. Admittedly, that does not sound as sexy as calling it an “innovation tournament.”

Here’s how it works: A company has a problem they want solved. They decide the “value” of finding a workable solution and they offer a “bounty” to anyone who can provide one. The bounty is only paid when they get what they need. This “pay for solution” model outsources the risk associated with complex problem solving.

The Netflix Prize used this approach. They only paid the team that ultimately improved the recommendation engine by 10%. Netflix wasn’t looking for the best solution; they were looking for one that met their specific needs. The bounty-based approach was useful because they only paid the $1 million when they received a successful solution.

With the bounty-based approach, a “winner” is selected only when the success criteria are met. Otherwise, the bounty is not paid.

With tournaments, there is always a winner, even if it is not a good solution.