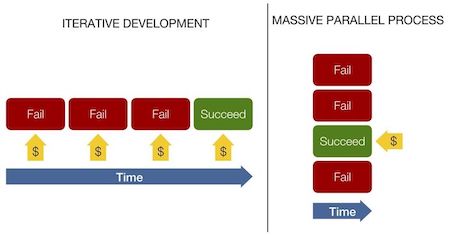 Tip 9 from Best Practices are Stupid. We dig even deeper into open innovation.

While attempting to find a suitable filament to make the incandescent electric light a viable device, Edison is famous for saying, “I have not failed 700 times. I have not failed once. I have succeeded in proving that those 700 ways will not work. When I have eliminated the ways that will not work, I will find the way that will work.”

Innovators embrace this quote because it seems to validate the iterative development process used by so many.

There is a widely held belief that you should keep on trying and failing until you find a solution that works, because you learn as much from failure as you do from success.

However, if Edison had found a solution to the light bulb challenge on the first try, would he have continued to seek out 700 other ways that did not work? Probably not.

Think about it this way…

Look at the first graphic. With the traditional model (left) you fail over and over again until you are finally successful. Because your employees are working and investing their time on each attempt, it costs the organization payroll and overhead. And because the failure process happens serially, it takes a long time.

Is there a better way to find solutions that minimizes your risk, cost, and time – especially for technical challenges?

The graphic on the right is based on a challenge-centered open innovation model. Alph Bingham, founder of InnoCentive, describes it as a “massively parallel process where failures and successes happen at the same time.” With this approach, you have the same number of failures, but there are two differences:

One: The failures are happening in parallel rather than in a series, significantly speeding up your time to solution.

Two: The cost of failure is pushed into the market and you only pay for value received, instead of paying for the time invested. You only pay for a successful solution.

Say you post a challenge and you get dozens (or hundreds) of people working to find solutions. Some solutions won’t work, but all you need is one that does work, and with this form of open innovation, you only pay for successful outcomes (based on the value of the solution, not the time invested). Failures cost you nothing in terms of time and money. With internal iterative development, you pay for the successes and the failures.

Do you really learn enough from your failures to justify the extra cost and time involved? Probably not.

Edison was a great inventor.  However, I suspect that if Edison were alive today, given the tools available, he might have tried an entirely different approach to developing the sustainable filament.

[this is a highly condensed version of the original chapter]