Have you ever had a trip that felt more like you were a contestant on The Amazing Race?

That was the case for me a few weeks back when I was scheduled to be the keynote speaker in Brazil at a marketing conference for 1,500 people. This turned out to be an adventure that looked doomed from the start.

2:30pm: Literally an hour before heading to the airport to fly to Brazil, something in the back of my mind told me I might have a problem. I recalled from an earlier trip in 1994 that I needed a visa and, for this trip, we had not secured one. After some digging, we discovered that a visa was required and I would not be able to get on the plane to Brazil without it. Yikes!! But given I was not scheduled to speak until Wednesday evening, I thought I would have time to get one. As it turns out, ignorance was bliss (for a little while), because getting a visa proved much more complicated than I expected…

5:30pm: Where could I get a visa? The first leg of my trip to Brazil was through Miami, so I decided to get one there. Despite the clear message on the Brazilian Consulate’s recorded hotline that they do not, under any circumstance, offer expedited visas, I flew to Miami anyway to see if they would make an exception.

6:30pm: Before hopping on my 7PM flight, I booked myself into a hotel at Miami airport for the evening so I could visit the Consulate first thing in the morning. We landed around 8PM and I took the shuttle to the airport for a good night sleep. I thought I might need it.

8:00am: I pulled my visa paperwork together, then Ubered to the Post Office to get a money order, and on to CVS for a passport photo.

10:00am: Once I had all of the necessary materials, I Ubered to the Brazilian embassy to discover that they only issue visas from 2pm – 4pm. Knowing I would need my energy, I Ubered to the hotel for a nap.

1:00pm: I arrived back at the embassy before they opened. I was one of the first people in line and hoped for the best.

2:30pm: It was my turn. Fingers crossed! I walked to the counter and handed over my passport and asked if I could get a rush visa. I was told, “In some cases we do issue emergency visas, but it is not an option for you.” As it turned out, I didn’t have any room in my passport! My last trips to Europe used up all the pages and I needed two empty pages for the visa. This was going to be more difficult than I thought.

3:30pm: My business manager made some calls to see if we could get extra pages in the passport and discovered two issues: 1) they no longer add supplemental pages; I would need to get a new passport, and 2) by the time I found out that my passport needed to be replaced, the passport office in Miami was closed. Knowing that getting to Brazil for Wednesday evening was no longer an option, the client offered to move me to the closing slot on Thursday evening. Would that still give me enough time? Probably not. At best, I would not have my visa until after 3PM Wednesday which would mean I would be too late given the long flight to Brazil.

5:00pm: I seemed to be out of options until, Fabio, a visa expert I was consulting with, got a lead. He said if I could somehow get a new passport, he could arrange a rush visa in the morning in Houston, but the Consulate there closed at noon. Getting a passport in Miami would not give me enough time to get to the Consulate in Houston.

5:30pm: Even Fabio was getting ready to throw in the towel at this point…until I had an idea. What if I flew to Houston and got my new passport there? Afterwards I could go to the Brazilian embassy to get the visa. It was a long shot and there were no guarantees.

6:00pm: Even with this idea, I was beginning to feel defeated. I was mentally exhausted. I just wanted to go home. So I called my fiancée for some consoling and advice. She said that I should not quit because I would always regret it if I didn’t see it to the end and do what was best for the client. I knew she was right. So I bought a ticket to Houston and booked a hotel walking distance from the passport office.

9:00pm: I flew to Houston and arrived at midnight hoping for the best in the morning. 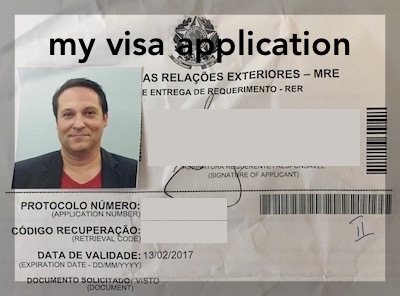 5:00am: I woke up early to fill out the passport application and rushed to the US passport office in Houston.

8:30am: Things were looking up…until I checked the flights online while waiting. Oh no!!! None of the flights would get me to Brazil on time. Feeling more deflated, I continued to push forward.

10:00am: With the new passport in hand, I walked (quickly) back to hotel, packed up, printed the new documents for the visa and Ubered to the Brazilian embassy.

11:00am: I arrived at the Embassy where, Rosanna, my contact, was waiting for me to expedite my visa.

11:30am: The unimaginable was accomplished – I obtained both a visa and passport in Houston. However, I still had no way to get to Brazil on time. We made numerous calls to airlines and US-based travel agencies and still came up with nothing. But I pushed on. With the help of Fabio, we found a travel agent who specializes in South American travel and, by some miracle, he found a flight that left Houston at 1:50pm.

12:00pm: I Ubered to the airport and arrived at the gate just as the plane was boarding.

1:50pm: I got on the plane and flew from Houston to Ft Lauderdale and then on to Brazil. I felt a bit more relaxed. The last hurdle was making my tight connection in São Paulo to my final destination: Porto Alegre. Fortunately the flights were on time.

10:30am: I landed in Porto Alegre, Brazil where a car was waiting to whisk me off to the event.

11:30am: I arrived at the venue. I met the event organizers and was ushered off into the green room where I did some last minute preparations. I grabbed a quick sandwich, took a 30 minute nap, and “showered” in the sink (use your imagination).

4:00pm: I was brought into the ballroom to coordinate last minute logistics with the AV team.

5:30pm: I took the stage…finally! I delivered my speech.

6:30pm: I left the stage. I met with some audience members who wanted their picture taken with me and was brought back to the green room where I was interviewed. I packed up and headed to a nearby hotel.

8:00pm: I arrived at the hotel – exhausted. I took a much needed nap – and an even more needed shower. 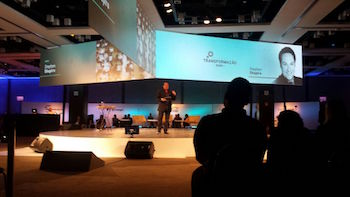 10:30pm A driver picked me up and brought me to the airport where I sat for a while to reflect on the past few days. 12 hours earlier I landed at the same airport and I am now leaving.

2:30am: My first flight departed with a short layover in Panama City before heading to Orlando.

4:00pm: I arrived home to celebrate my successful journey and finally get some much-needed sleep.

This amazing race taught me a lot. While the biggest lesson was obvious: always check to see if a visa is needed, the supplemental lessons were equally as valuable:

One of the exercises I decided to do with the group in Brazil was my “Making the Impossible Possible” process. It felt appropriate given what I had gone through that week.

Where in your life are you asked to make the impossible possible? Where do you stop when maybe success is right around the corner? Who do you need on your team to provide expertise or emotional support? How can creativity help you look at the problem in a different light?

I’ll never say that everything is possible. But I do believe that more things are possible than we think.