The question, “Do you really think for yourself?” isn’t as easy to answer as you might think. When a challenge or problem arises at work and you’re unsure of an answer, you probably rely on the judgment of others. But what if you know the answer to the problem? How likely are you to be swayed by other people’s opinions?

Countless studies illustrate we may indeed deny our own senses to conform with others. One old yet timeless experiment was designed by psychologist Solomon Asch. He asked participants to determine which of the three lines from the second image is the same length as the line in the image on the left. 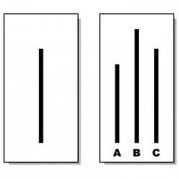 While the answer is obviously C, his studies showed that people who would otherwise be certain of their convictions could be “manipulated” into questioning their beliefs. This was not done through coercion, peer pressure or even incentives. Nine experiment participants were shown the above image and were asked to call out which line on the right was the same length as the one on the left. This was done 12 times. Only one of the nine participants was actually being tested. The other eight were “plants” and were told to purposefully call out incorrect answers.

The result? Seventy-six percent of participants being tested denied their own senses at least once, choosing either A or B. And one-third of the time, across all the trials, the one who was actually being tested conformed to what the crowd thought.

In a nutshell, when people are in a group, individuals tend to provide similar responses, even if they believe something different. There are a variety of reasons for this, including fear of disapproval, self-consciousness and not wanting to stand out or be different.

We see this phenomenon take place in the world of innovation. It’s called “group think.” In group situations, it’s easier to fit in with the crowd than it is to take a strong stand for your own beliefs. And of course, in some cases, people really do subconsciously alter their opinions based on what a crowd believes. It’s harder than we anticipate to think independently.

This is why, when brainstorming (or using other forms of collaborative innovation), it’s often best for individuals to write down their own solutions before seeing what the group thinks. (The article Why Brainstorming is Stupid dives a little deeper into this idea.) But even outside the world of innovation, it’s useful to recognize this phenomenon.

The reality is, in many of our day-to-day situations, we already know the answer to our challenges but we just don’t want to admit it to ourselves. Should I get a business loan? Should I buy a new car? Should I end a difficult relationship? In these cases, we often seek advice from friends and colleagues first. Maybe we don’t trust our “gut.” Or maybe we want to find scapegoats to blame in case our decision turns out to be a bad one.

Lay Out All the Facts

A technique I use to help others make tough decisions is by flipping a coin. No, the coin flip does not determine your fate. Instead, you check how you “feel” the moment the result is revealed. Were you relieved or disappointed? This instantaneous response illustrates how you really feel at a subconscious level, and what you truly believe to be the right decision.

Although you want to be clear on your own beliefs, you need to avoid being overly dogmatic. Otherwise you might succumb to something called confirmation bias—the psychological phenomenon where we find evidence to support our beliefs, and ignore the information that refutes them. As a result, we often get attached to beliefs that may be irrational, preventing us from seeing what’s really in front of us.

The point of all this is that we are more susceptible to the influence of others than we might think. Get in touch with your beliefs. Don’t assume them to be true. But then again, don’t assume that others are right either. Use critical thinking. Ask why you believe what you believe. Groups can be quite influential at a subconscious level, causing us to change our minds without thinking.

I don’t believe there are bad decisions or good decisions. There are only consequences. When we understand this, it can help remove some of the pressure associated with trying to “get it right.”

This article originally appeared on the American Express OPEN Forum