Innovation does not need to be new or original. It just needs to be valuable…

One of my favorite quotes comes from Mark Twain:

“There is no such thing as a new idea. It is impossible. We simply take a lot of old ideas and put them into a sort of mental kaleidoscope. We give them a turn and they make new and curious combinations. We keep on turning and making new combinations indefinitely; but they are the same old pieces of colored glass that have been in use through all the ages.” 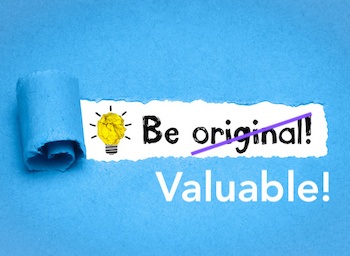 I posted this quote on social media and quickly received pushback from someone who claimed that Einstein’s Theory of Relativity and Darwin’s theories on evolution were new ideas.

That’s when the debate began. Were they truly original ideas?

Are there any original ideas?

We know that Darwin’s theories on evolution were pre-dated by Lamarck’s theory of the transmutation of species and others. Even Einstein credits David Hume and Ernst Mach as being major influencers in his work.

This raised the question: Are there actually any new ideas?

Or as someone asked, “When was the origin of an original thought? There has to be a beginning. Right? Is it just that we’ll never know because there’s no record? And at what point did original ideas stop, and kaleidoscopes start?”

This got my head spinning and sparked some interesting discussion.

My first response was, “Great question. I don’t have an answer.”

Has there ever been a new creation that could not linked back to a previous innovation?

Although new ideas need to start somewhere, I struggle to find an example. Every discovery appears to be predicated on an earlier one. Penicillin, a 20th century discovery, has roots going back 5,000 years to Mesopotamia, Ancient Egypt, India, and China when fungi and other plants were used to treat diseases. But we can go even further back to the Paleolithic 60,000 years ago when plants were used as medicine according to archeologists.

Why do we focus on novelty?

Then Mark Bowden, founder of TRUTHPLANE, chimed in with some perspectives.

“‘New ideas’ is an explanation for how we seemingly come up with knowledge from nowhere. There does not have to be an original thought. But the idea of it is helpful for us.”

He suggested that we try to imagine anything that is not a derivative of something from the past. To do this, you would need explain it in terms of nothing but itself, without metaphors.

He then continued with an interesting point of view:

“I suspect part of the problem is in the word ‘original’ being thought to mean new, rather than to mean ‘now seen from over the horizon.’ We don’t look over the curvature of the earth to notice the new day was already there. We are quite obsessed with the value of ‘newness.'”

Why are we obsessed with the value of newness?

He closed with something I find quite poetic and deep:

“We know that things end, often painfully. So, we are desperate for greater to be born. Rather than the old and fragile to be built upon.”

Whoa. This is so profound that I’m still thinking about it hours after I first read those words.

What do you believe? Can you think of anything that is truly original? Or is everything really just a derivative of the past? What if every new idea is based on something that once existed?

What if there is no such thing as a new idea?

I see many people get stopped with their innovation efforts because they feel that it has already been done. So, the belief that their idea is not truly novel stops them.

But what if there is nothing new under the sun? Would this give you freedom? Would this help you overcome the internal obstacles that stop you from bringing your ideas to the world?

Stop obsessing over novelty. Instead, focus on value. Even if your idea is not new, your unique perspective and spin could create something the world needs.