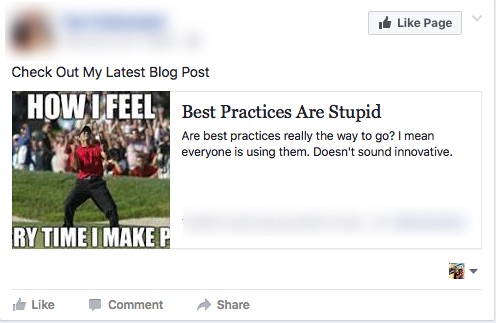 best practices =
copying someone else =
plagiarism

Recently I discovered that someone wrote a 1,000 word article that included passages lifted straight from my book, “Best Practices are Stupid.” The examples were the same. The language was the same. The only original part to the article were the first two lines. After that it was all my content.

And no, this was not a computer “scraping” my blog. It was not some unscrupulous internet marketing person trying to draw traffic.

It was from another professional speaker! Someone who calls himself a “visionary.”

Here’s the kicker, he was dumb enough to title the article, “Best Practices are Stupid!” (the image is his Facebook post promoting his article)

Fortunately, everyone who read the article immediately knew that it was my content. In fact, so many people commented on the blog post letting the author know this was the case that he eventually pulled down the article due to pressure.

I’m not going to shame the individual by mentioning him by name. That’s not my goal here.

Call it what you want – imitation, copying, plagiarism, best practices – there is little value or beauty in a replica.

Trademarks, copyrights, patents, and trade secrets can be used to protect some innovation. But unless you want to go through a lot of expensive legal battles, these may not always be the best option.

Sometimes the best protection is to be known for something that is instantly recognized as yours. When you do this, the market will self-correct. When the competition copies you, people will immediately devalue the replica.

Imagine if you saw a television commercial that said, “Switch to our insurance and save 15% in 15 minutes.” Unless the company was Geico, you would know it was a complete rip-off. Would you do business with a company that was so unoriginal that they had to copy someone else? 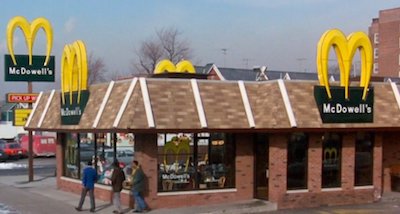 In the movie, “Coming to America,” there was a fast-food restaurant, McDowell’s with a big yellow “M.” Had you seen this in real-life you would immediately know it was copied from McDonald’s.

When you listen to a cover band, you know it’s not original music – and you also know that they’re earning a small fraction of what the original musicians made. And although counterfeit items try to replicate to the smallest detail, they never can charge the same premium as the real luxury item – and the wearer will never have the same experience knowing the item is fake.

And of course there are numerous examples of plagiarism bringing down political figures and many others.

Best practices are the business-world equivalent of counterfeiting and plagiarism.

Although there is a time and place for them (which I explain in my book), they are never a form of innovation. Replication is never innovation.

Although it is fine to be inspired by past creations, you always want to make significant improvements and make it your own.

P.S. A few years ago I wrote an article on a similar topic. I was inspired by meeting Larry the Cable Guy’s impersonator in Vegas.