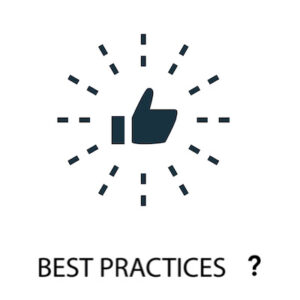 While speaking at a conference several years ago, I tried an experiment.

I asked each of these individuals how many of these practices they used in their personal life or business. Turns out, all five practices were used by all ten of these successful entrepreneurs.

The audience gasped. They were on the edge of their seats waiting to hear the keys to the kingdom. Then I read off the five practices:

Although the successful entrepreneurs all laughed, the audience was disappointed.

But it made an important point. Any time you hear about a best practice, make sure you consider if it was the true cause of success, and not a coincidence or correlation.

The Under-sampling of Failure

For my experiment, I found five successful people knowing they would have used these silly practices. But had I taken the time to look, I would certainly have found people in the audience who used those exact practices yet weren’t nearly as successful.

This is the under-sampling of failure. We tend to focus on the winners and successes, but we don’t take time to track down the times when advice or a best practice didn’t work.

We focus on those who did well, but we don’t spend any time investigating all the people who tried that same practice and weren’t successful. Why can a practice have both successes and failures? To answer this, we need to distinguish causation from correlation and coincidence.

Causation means that the given practice was the actual cause of a company’s success. If they didn’t apply this practice, they would not have achieved the results they did.

But in many cases, the relationship between a practice and success is not causation but rather correlation or coincidence.
Coincidence means there is no relationship. The silly practices I shared had little or no relationship to someone’s success. Of course, if you never brush your teeth, never smile, and never read your email, it might prevent you from being successful. But doing these things will certainly not create success.

Correlation is best explained with a simple example.

Let’s assume that the following statement is true: “Individuals with greater wealth are happier.”

Most people reading this will jump to the conclusion that money makes people happy. In doing so, they assume that money is the cause of happiness. If we make money, we become happy.

But we know that this is not the case at all. Money does not cause happiness; happiness creates wealth. The happier someone is, the more they are eager to work and the more people want to work with them.

Wealth and happiness are correlated. But money doesn’t cause happiness; happiness causes wealth. The wrong causation leads people to chase wealth in the belief that they’ll be happy, and they’re never happy.

Understanding the distinction between causation, correlation, and coincidence is critical for innovation. If you’re going to apply a supposed best practice, you had better understand that the work that you’re doing and the money you’re investing will cause the success you want.