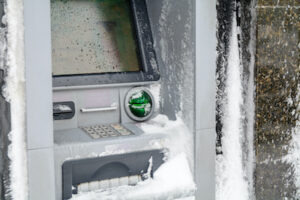 We often hear the expression “Build it and they will come.” With innovation, a more accurate statement is “Eliminate a pain and they will come.”  The ultimate success of the automatic teller machine (ATM) is a great example of this. The story is extremely relevant given our current circumstances.

In the mid-1970s, Citibank was the second largest bank. In 1977, after investing hundreds of millions of dollars in ATM technology research and development, Citibank decided to install machines across all of New York City. At first, they were not very popular. The technology was confusing to first-time users, the machines were not always accurate (they sometimes dispensed the wrong amount of money), and they were impersonal.

The ATM might never have been a hit if it weren’t for a natural disaster.

February 1978 will always be remembered for a blizzard that dumped as much as four feet of snow in the Northeast. In New York City, nearly two feet of snow brought the city to a grinding halt. Banks weren’t open. Instead, people got their money by cashing checks at local supermarkets. But most of the supermarkets quickly ran out of money.

This created a massive “pain.”

Where did people turn?

The ATMs. It is estimated that during the storms, use of the machines increased by more than 20 percent. Soon after, Citibank started running TV ads showing people trudging through the snow drifts in New York City. That’s when the company introduced their wildly popular slogan “The Citi Never Sleeps.” This was the real birth of the automatic teller machine.

By 1981, Citibank’s market share of New York deposits had doubled, with a lot of the growth attributed to the ATM.

This story illustrates an innovator’s dilemma and opportunity. Brilliant innovations are not necessarily adopted by the masses, and some ideas just need time to incubate and gain acceptance. But will your business survive long enough to see the success?

People take massive risks to eliminate their pains, but they play it safe when it comes to adding convenience. ATMs were primarily about convenience. What did it take for them to become a success? A pain caused by a natural disaster.

The current pandemic is another great example of this.

Virtual technologies have been around for decades. In fact, the first virtual reality headsetwas created in 1968 by computer scientist Ivan Sutherland and his student Bob Sproull. And Webex was founded in 1995. But, like the ATM, adoption was slow.

Now everyone is scrambling to go virtual. The current hot platform is Zoom, and its market cap is roughly $48 billion. This is more than those of American Airlines, United Airlines, Delta, and JetBlue combined (approximately $4 billion, $7 billion, $12 billion, and $2 billion, respectively – at the time of writing). Technologies that were once plentiful and inexpensive, such as webcams, are now sold out and overpriced.

Just like the ATM, adoption of virtual technologies will continue long after we return to in-person meetings.

Are your new ideas solving a problem? If they are just a convenience, what can you do to take advantage of a pain–without having to rely on a natural disaster or pandemic?