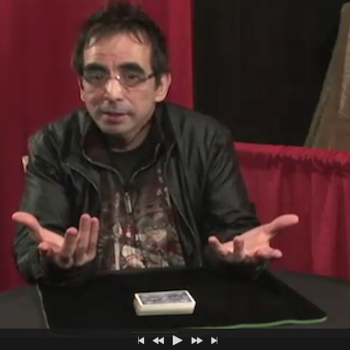 The other day I posted an article about purposeful tangents that included a video interview with magician Armando Lucero.  If you did not read that article, please sure to do so before reading this video transcription.

Armando: You know I enjoyed figuring out the facts on my own, so I had this habit whenever somebody did something, just for fun I would try to solve it because I was new still.  Sometimes they would try to show me again and I would say, no I don’t want to see it again. So after about a year and the gymnastics of doing this, I kind of sense something was happening here. I didn’t know what it was, I didn’t know how to put it in words but eventually, I decided I’m not going to read books on magic anymore. I stopped at that point and I made an announcement to my friends, and I said, I’m going to stop reading books. And they go, “Are you crazy? You are going to hurt yourself.”

Interviewer: That’s the opposite of the advice you would get from most people.

Armando: But I was experimenting with myself, and I’m pretty extreme, so when I realized that there was something going on with myself I sensed it, I didn’t know. I decided I’m going to stop.

Interviewer: So what happened then when you decided to stop reading magic books?

Armando: I experimented; I don’t know how long I would do with this. But I thought, here was my hunch. I thought; this was what I told my friends when I’m sixteen, I said, if I stop reading magic books, then I will allow myself the opportunity to discover and work out the process of magic instead of just going to the answers. You know? And I wasn’t eloquent with the words, I just kind of had a hunch, but at the age of eighteen I was in college and I took a class.

I took a class that a friend of mine told me to check out because this guy was interesting. And he had unkempt hair, wrinkled, he never ironed his shirts, he never worried about clothes whether they matched or not. He was a math professor and he was like part genius, part street guy. I just sat in his class because my friends said, you will like him. So I went in there and I loved what he said, I only needed that one day, I didn’t need to take (the entire) class.

He said this was the most important day of the entire class. It was the first day. I don’t know if it reached anybody else, but touched me. And to this end I will tell you what happened. He put up three problems and he said this is all we are going to do today; just these three problems. Start with one, then do two, and finish with three. That’s it.

He started to do his work while were working out the problems. At the end of the class, he said, “Everybody put down their pencil, stop. This is not a test by the way, this is something that I need to pass on to you because I feel the need as a real teacher; and this is the only day I’m going to do it because I don’t have time. Because they don’t pay us enough and they don’t give us enough time. But as a real teacher my conscience, this is what I have to share with you.”

I go wow, this is powerful, I don’t know what he is going to say, but this is powerful. He asked, “How many of you finished problem one?” Every hand went up, he said, “I just care about whether you were actually able to attempt it. I don’t care if you got the answer right, but you are familiar with it.” We said yes. “Okay everybody,” he said, “good, it’s a prerequisite. You need to know these formulas.” Problem number two- half the class raised their hands. And problem number three, only three or four people raised their hands.
He goes, “This is interesting, I’m going to tell you something, all three problems are the same difficulty.” And everybody goes, no way. He said, “They are the same difficulty for those who know how to think.” Wow, what a slam. He continued, “But if you don’t know how to think, this is what we get. I’m going to tell you why. Problem 1 is learned by rote, just purely memorizing and executing, that’s it. This is how we teach; this is all the time we have. Problem 2 is the same problem but you don’t recognize it because we never showed it to you in this form. So let me rearrange it, now you recognize it. See, it takes a creative leap to process this problem. Problem 3, it’s a whole new problem.”,

And everybody says, well why do you say that they are all the same? And he said, “Because, if you had then exercising your creativity from a long time ago when you were a child, every class you progress higher and higher, you always challenge yourself with creatively processing problem solving, then coming to the answer. Then you would have exercised your creativity and problem solving skills. You will have learned how to think, by the time you reach this point you would be able to solve this problem no differently from the first because they are about the same level. But if you are having problems here and I’m proving it, you need to exercise your thinking.”

And then right after he finished, he’s just nonchalant and he said, “Alright, that’s it, that’s all the time I’m going to spend on this. This is the real teaching, now we are going to go back to the mundane learning by rote, just memorization execution. But all the stuff I just told you, you need to do on your own outside of the class and apply it. Because in the real world that’s what you really need, not the stuff we are going to share.”

And that was it, and I go, basically, that’s what it was, I realized I was doing that at sixteen. So I when I stopped reading the magic books, it was because we are so hungry sometimes for information, we forget how to learn. And the how is important too, and I was just grabbing information here and there, and I didn’t have any system. Nobody showed me, nobody told me, so eventually after that I knew I was in the right direction.

And it took a long time because all my friends were learning more magic that I was. They are reading books, they were well read, they sounded smart. They could quote, they could recite, and after a while I didn’t feel so intimidated because even though they could sound smarter than me, at times they didn’t really own the information in the same way as someone who discovered it and felt it from the inside out.

So I felt very comfortable and I didn’t mind.

Eventually I learned to develop a way to approach magic that seems to be different just because I started that way.

Interviewer: So when you started math and philosophy, did either of those areas influence your magic at all when you went to doing magic, did they?

Armando: Yes, it’s strange to me when people actually separate different schools of thought as if they are separate. I never consider that especially when I’m saying philosophy. Knowledge is one; I really believe that, I think I learned from everything when you put it all together. And I’m influenced by all things, and this is not esoteric, I can actually prove my points, you know. I remember actually going to for example, to a party where some psychologists invited me because they love magic. So I went to the party and there happened to be several other doctors; PhD’s not medical doctors, PhD’s scientists.

There were about five of them. And while I was talking to them, they asked me, “So what are you working on now?” I said, “I was thinking about light and creating black art with light.” And the physicist that was there just went, Hmm. Because he was looking at me as I suspect, as a magician that just does tricks who knows nothing about other forms of education.

He asked, what do you mean? I said, “I was studying lasers, I’m really interested in lasers because if you send an opposite wave link then it supposedly cancels out but we know that it doesn’t really eliminate the light, the light is still there. It’s just that you can’t see it, but it might create a curtain of light, and nullify you being able to see through the curtain.” He started thinking about that and said that might be possible. So here is this physicist, he’s a scientist, he is basically an experimental scientist and his job is to problem solve things.

So it’s funny, like we are coming from two different place and we are talking about this interesting subject that connects us. But the point is that you know, I was trying to gather from all forms of schools of thought and I just happened to like to learn about everything, and he was surprised. What was good for me was being able to gain the respect from these people who actually, just before the party, they thought that I was just a guy that practices double lifts (a magic move) and things like that. They weren’t stupid, but you can use all knowledge to uplift your magic. I mean everything; theatre, art, philosophy, everything.

Interviewer: Yeah, engineering, I know you have quite an engineering background as well.

Armando: Yeah I like to build portable folding structures.

Interviewer: Yes, having devoted really so much of your life to magic, and now passing on what you have known to the next generation and having performed in so many arenas. Can you describe in words what magic means to you?

Armando: That’s a deep subject and I am glad you asked that, because actually I am surprised when I ask others this that they don’t seem to have a way to express it. And I am not saying that I have the best answer. It’s just my answer, for me personally I think and I really believe this, everybody needs to find their own way. But I do think it’s important to have a way to define yourself. Because if you don’t define yourself, you don’t know who you are, then you don’t have a direction. You just kind of are groping your way, bumping into this thing, hoping to find something by accident. So if you define yourself, and you define the magic that you want and what it is, then you can get to it. If you build the bridge you need a set of plans. Now art and magic are so widespread in their ideas, but you can define it for yourself.