A client recently asked me why large companies never develop “breakthrough” innovations, and instead rely on buying small companies or licensing their technologies.

He felt that the game changing innovations were always the result of someone “tinkering in a garage,” like Michael Dell or Mark Zuckerberg.

He wondered how his organization could replicate the innovation style of start-ups as a way of developing these major innovations in-house.

I told him this was a bad idea.

For every Facebook, there are thousands of companies that invested millions of dollars, but were ultimately terrible failures.   But we don’t see those failures.  Why?

There is a concept (discussed here previously) called the under-sampling of failure. This theory states that we tend to focus on the successes produced, but rarely examine the failures. This occurs in part due to our limited exposure to those who have tried and failed.

As a result, we can’t predict which technologies or business models will be successful.

This presents a dilemma for large companies….

Because we can’t predict what will be successful, if you try to develop major breakthroughs in-house, you have to be prepared to fund all of the failures, as well as reap the rewards of the success.

Because Edison could not predict which of the 700 filaments, he needed to try 700 variations.

The same is true for any new technology. We cannot predict which will be successful.

As a result, if you attempt to develop a new technology in house, you need to be prepared for a potentially long line of failures before you discover the one that works. This process is serial, meaning you try one technology until it fails and then you try another, working until you are ultimately successful. This can be an extraordinarily time consuming process.

This model is expensive. You pay for all fixed costs of payroll and facilities. In a nutshell, you are paying based on the time it takes, not the value of the result.

Remember, this is a serial process.  Let’s assume that while you, Big Innovation Company, are attempting to create this new technology, there are 1,000 small companies also working simultaneously on the same problem, each investing in a different version of the technology. Most of them will fail, but one will most likely succeed. Given this, the odds are that someone else will discover a workable technology before you, because the 1,000 companies are working in parallel. We just can’t predict who it will be.

Because we can’t predict what will be successful, perhaps a better model is to postpone our decision until the market (the 1,000 small companies) sorts out the winning technology.

If we look at how this “market” actually works, you will see a parallel process of successes and failures (see model below). Everyone is working on the same problem with a different solution at the same time. Most technologies will fail. Many of the small companies will go bankrupt. It is (almost) a winner-takes-all model. 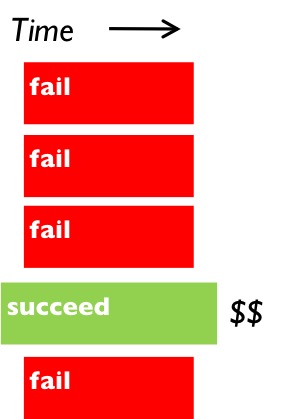 If you have 1,000 companies with 100 employees each working on this at the same time, you have 100,000 people working on the problem in parallel. The amount of time and money invested in this market is enormous.

Are you, Big Innovation Company, prepared to pay these kinds of costs to replicate this market?

If you postpone your technology decision and wait for the market to sort out the winner, you can save yourself a lot of time and money.

With this strategy, the failures are funded by the market, not you (i.e., investors in the start-ups take the risk). And, when a successful technology is found, you only pay for the value created, not the hours it took to create the innovation.

Although your organizations should be investing in innovation, it should avoid internally developing radical/breakthrough innovations that could better be developed by the market. These types of “inventions” should be done leveraging open innovation, crowdsourcing, partnerships, or even acquisitions.

This post generated a fair amount of debate. That was my intention. I chose a provocative title for the article. It would be more appropriate to say “think twice before investing in breakthrough innovation.” I would never suggest that a company only invest in incremental innovation. But I also think that companies often underestimate the complexity associated with game changing innovation.

The undersampling of failure is a critical concept that is overlooked all too often.

If it costs a company $1M to successfully bring a new technology to market, you can be certain that the “market” invested at least $100M in failures. We know this to be true just by looking at a number of widely publicized open innovation competitions. The team that successfully developed the winning solution and won the $10M Ansari X Prize invested $100M in their developing their solution. We also know that many other teams invested a massive amount in developing unsuccessful solutions. The same is true with the Netflix Prize. Dozens of teams invested time and energy in ultimately unsuccessful solutions.

It is also important to discuss different types of innovations. There are two primary factors to consider: technical uncertainty and market uncertainty.

For market uncertainty, there are clearly things we can do in order to predict success. Having said that, often the winners in the market are not the best but rather the ones that somehow rose to the top. No one could have predicted that Facebook, for example, would end up dominating the social media market. Google has learned that even having the brightest minds (with a great product) does not guarantee market success. The market often decides; and the market is not always rational. But at least for innovations with market ambiguity, we can learn by conducting experiments (which, by the way, is very different than running pilots of proofs of concept).

For technical uncertainty, this can be more difficult. Many people are trying to develop new technologies (better batteries, new fuels, etc). Most attempts will fail, because it is impossible to predict which ones will give the best results. This is where you can leverage open innovation as a means of paying for success rather than time. This does not mean you can not attempt to put some of your energy into internal development efforts in these areas. However, don’t assume your internal efforts will be successful. Hedge your bets. If the technology is not in your sweetspot (your differentiator), then certainly consider looking externally for solutions so that you don’t divert your energies.

To be clear, I am not advocating M&A as an innovation strategy. That never works. However, I am a huge fan of various forms of open innovation, crowdsourcing, alliances, licensing and other techniques as a way of augmenting your internal innovation efforts.

I will be writing more about this concept in the near future. Stay tuned.