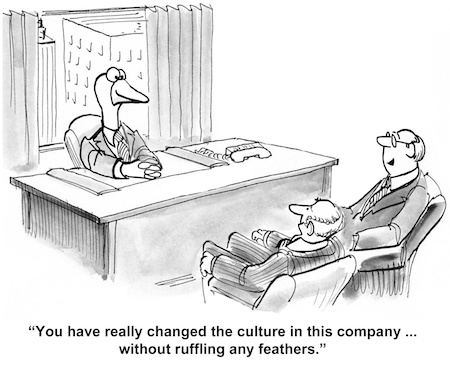 Contrary to conventional wisdom, opposites don’t attract–and this is bad for innovation….

I remember speaking with a recruiter who once turned down a candidate I had recommended. I asked why and was told, “He didn’t fit the mold.”

In other words, unless you fit our cookie cutter requirements, you won’t work here.

At first glance, there wasn’t much difference in the performance of diverse teams compared to homogeneous teams. But that wasn’t the whole story. The types of tasks the teams had to perform had a significant impact on performance. Bowers and his colleagues went further and distinguished “low-difficulty” tasks from “high-difficulty” tasks based on how much the tasks involved uncertainty, complexity, and demand for high-level processing. For relatively simple group tasks, homogeneous groups performed better than heterogeneous groups. However, in situations involving high-difficulty tasks, diverse groups consistently performed the best.

Innovation is of course a high-difficulty task. It is, by its very nature, fraught with uncertainty and complexity. Although homogeneous teams are more efficient, it is the uniformity of thinking on these types of teams that limits breakthrough ideas and reduces innovation. A range of diversity should be the goal in constructing such groups in order to maximize team performance.

There’s even evidence that this diversity at the leadership level translates directly into corporate profits. Sigal Barsade and colleagues at the University of Pennsylvania’s Wharton business school studied top management teams at large corporations in the United States. They found that the more diverse the functional roles of the members of those teams were, the greater the average, market-adjusted financial return of those companies. Diversity of the top leaders translated into bottom-line results. Because personality styles sometimes map to functional roles, an easy first step in creating teams with diverse styles is to create teams with cross-functional participation.

So, if diversity is important to growth and profits, why don’t more organizations do this? The main reason: it is not easy.

The desire for similarity is a naturally ingrained tribal instinct. Opposites don’t attract, they detract. We find it easier to work with people who are similar to us. As a result, teams that lack diversity are the norm.

And just because you have a diverse team does not mean it will perform well. As a leader, you need to know how to manage and embrace different styles. If not handled properly, divergent thinking can cause conflicts that can have a profoundly negative impact on the team’s overall performance.

Researchers Antoinette McCallin and Anita Bamford of Auckland University of Technology published a study of interdisciplinary treatment teams in hospitals. The researchers focused on how members of diverse teams handled the inevitable differences in skills, perspectives, and personalities.

“On the one hand,” the researchers wrote, “team diversity was tolerated as an essential element of interdisciplinary practice. On the other hand, the emotions engendered by the wide-ranging differences were ignored altogether. Some people simply exited the team; others withdrew; a number denied the effects on team function and quality care; others became angry and anxious; and several attended counseling sessions. Job satisfaction certainly declined as professional practitioners were paralyzed and unable to address problems at all.”

So, although people conceptually understand that diverse thinking is needed, it is not tolerated, let alone embraced, by most.

Therefore you need to not only attract people with divergent backgrounds onto your team, you also need to make sure that every person has an understanding of and appreciation for the contribution of others.

After giving a speech a number of years back, a woman in the audience came up to me and said, “I have two candidates that I am considering for an important role. One person fits the mold and he is from our industry. The other feels riskier because she comes from a completely different background.” Based on my speech, the riskier candidate was hired. And the results were amazing as she was able to bring fresh perspectives to a stale environment.

Although building high-performing divergent teams may be difficult, doing it is critical. Because if you only hire people who fit the mold, your organization will eventually grow mold.