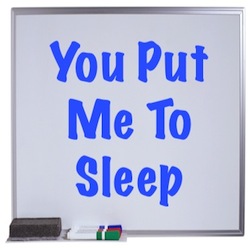 Using this approach, I might say, “To innovate more effectively, you need to define your challenges properly. Problem definition is one of the most critical steps of the innovation process. Here is how you do it…” I would then share my approach followed by some examples of where this was used successfully.

Does this sound familiar? If so, do you believe this is an effective method?

From my perspective, this is the perfect way to deliver a boring presentation.

It is an approach I choose to avoid.

Instead, I start with examples. Lots of examples. And only when I have a strong emotional buy-in, do I tell them the point.

When I speak about problem definition (the example I used above) I start with an example of a company that attempted to innovate but failed. Oh, and by the way, the approach they used is one that most organizations use. I then use a second example which seemed like a good idea, but again had unintended consequences. Next I use a third example that apparently addressed the issues of the first two failures, but in fact went terribly wrong.

At this point there is a lot of nervous laughter in the audience. I’ve talked about all of the things most companies do when they innovate.

Only then, after the pain is created and most people in the audience can relate to everything I have said, do I start down the path of telling them how to do it correctly. But again I don’t immediately give the solution.

Instead I share several examples that were solved only by reframing the challenge. Only by looking at them through a different lens could they find a workable solution.

I’m 20 minutes into this topic and I still have not given the audience “the answer.” Only after I have people completely bought in (emotionally and intellectually) through 6 or 7 examples, do I give them the punch line.

In this case I say, “All of these examples – the successes and failures – make an important point: Don’t think outside the box; find a better box…” I then dig deeper into what that means, how to make it a reality, and why it drives a 10X improvement on innovation ROI.

People remember concepts through emotion and experience (my speeches are always highly interactive). Telling people what to do has little impact on behaviors. You need to speak to them at a much deeper level.

Get buy-in from the heart first, and then the head.