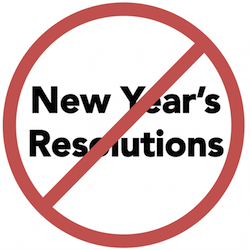 It’s that time of year again…time to set your New Year’s Resolutions. Unfortunately over 90% of people fail to keep them. What’s the solution? One perspective can be found in my Wall Street Journal article from several years ago. Happy New Year!

Like dinosaurs and gas-guzzling SUVs, is the traditional New Year’s Resolution rapidly becoming a thing of the past?

According to a survey by Stephen Shapiro, the answer is a resounding “Yes.”

In a survey of 1012 Americans, only 45% of Americans now say they write up New Years Resolutions down from 88% of Americans who did so in the past. The random telephone survey was conducted by Shapiro, author of Goal-Free Living, with the assistance of Opinion Research Corp. of Princeton N.J. The survey has a margin of error of 3%.

The figures show a drop of almost 50 percent among Americans who use the annual goal-setting institution. Why the dramatic drop? “New Year’s Resolutions just don’t work,” says Shapiro. “According to our study, only 8% of Americans say they always achieve their New Year’s resolutions. The way it seems to work now, setting a New Year’s Resolution is a recipe for defeat. It has come to be one of the nation’s most masochistic traditions — almost rivaling Halloween in that respect.”

Says Shapiro: “At some point, people just decide to stop hurting themselves, and they call the whole thing off.”

According to the study, New Year’s resolution usage in America has been falling rapidly with age 57% of those aged 18-24 set New Years resolutions, compared with only 32% of those over age 54 who still set them. “As we get older, we get wiser and we identify things that don’t work for us and stop using them,” says Shapiro.

Among those who plan on continuing the tradition, a third (33%) say they will set just a single New Year’s goal for themselves, while 26% set 2-3 new goals for the year, and a hardy 6% set will set 4 or more goals for the New Year.

Setting a Resolution this Year? Use Common Sense — or Maybe Not!

While Shapiro thinks the basic idea of the end-of-the year evaluation is a good one, he says that Americans as a whole have had little training in the process of setting realistic goals that will actually increase their happiness — and that because of this, most New Years Resolutions just end up causing increased levels of bitterness, defeat and unhappiness.

“Albert Einstein once defined common sense as ‘the collection of prejudices acquired by age 18,’” says Shapiro. “In this sense, too many Americans are using too much ‘common sense’ when setting their annual goals. Why not this year, as an experiment set goals that are chosen to bring joy and success in the New Year? Instead of setting goals based on supposed ‘faults’ or ‘flaws’ that your parents or your spouse might want you to ‘correct’– why not set goals that can lead to your own, individual happiness, instead of just conforming to the often misguided, if well-meaning, expectations of others?”

According to the study, of those who plan to set New Years Resolutions for 2006:

“These are all good areas to focus on in the New Year,” agrees Shapiro. “But the danger in this type of goal-setting is that we become focused on where we are going rather than enjoying where we are right now. We sacrifice today in the hope that a better future will emerge — only to discover that achievement rarely leads to true joy.”

If you absolutely have to set New Year’s Resolutions, says Shapiro, here is his advice:

1. Choose a broad theme rather than specific measurable goal. “When most people set New Year’s Resolutions, they have specific, measurable results that they want to achieve,” says Shapiro. “Lose 15 pounds. Run a marathon. Quit smoking. In doing so, you become myopically focused and shut down other, more potentially exciting, possibilities from appearing in your life.”

Rather than resolutions, he says, choose one or two words to describe your next year. It serves as a theme for the year rather than a specific goal. “For a colleague of mine, this year is about ‘service,” says Shapiro, “serving others in whatever way she can to make a contribution. For another person, this year is about ‘flow,’ making the year effortless. For a friend who is going through a divorce and change of career, his theme is ‘new beginnings’”

2. Choose an expansive and empowering theme. Says Shapiro: “Choose a theme that is expansive, gets your juices flowing, has you excited, and moves you into action. Can’t think of a theme? How about passion, peace, love, friendship, travel, or self-expression? Or maybe new horizons, adventure, or mind expansion might be a good start. Don’t worry if you haven’t named your aspiration yet –it may come out of your theme. Rather than sitting around trying to figure out your passion, choose a direction that will enable you to experience it. If all else fails and you still can’t figure out what your passion is, then make ‘finding your passion’ your theme.

“Ask yourself: Why? What is the one word you want to use to describe your next year? A good place to start is with your traditional resolutions. Then ask yourself why. Want to lose weight? Look at the reasons why. Do you want to be healthier? Do you want to have more confidence? If so, instead of dieting, ‘health’ or ‘confidence’ may be good themes.

Suggests Shapiro: “Replace a bad habit with something good. It is difficult to quit any bad habit. When you say you want to quit smoking, the brain ignores the word ‘quit’ and focuses on the word ‘smoking.’ That is all you can think about. Everything around you reminds you of the pleasures of smoking, causing you to crave one last cigarette. When dieting, our mind is focused on food. We feel deprived. We focus on what we can’t have and in the end our diets end with binge eating.

“I used to be a Diet Coke addict, drinking as much as five liters a day. Every time I tried to stop, I would focus on it so much that I would end up drinking more. What worked? Instead of reducing my cola consumption, I decided to let myself drink as much carbonated beverages as I wanted, as long as I drank at least two liters of water a day. It doesn’t take that much discipline to drink two liters of water. And by paying attention to my body and how much better I feel, it positively reinforces the new behavior and helps me detach from the old. Now I find I rarely drink much soda.”

3. Reflect on the previous year. Suggests Shapiro: “Start your resolution-setting ritual on the winter solstice of each year (December 21). Take time to reflect on what you accomplished; the up and the downs. Be sure to really look at the powerful changes and experiences you had. The key thing is to not beat yourself up. In life we tend to focus on wins and losses. Successes and failures. When reflecting on the past, don’t focus on whether you failed or succeeded. Instead, ask yourself, Why? Why did you succeed? Why did you fail? Only through this reflection, and through embracing these situations, can you learn and grow. And of course, celebrate your successes.”

4. Develop your theme jointly. “If you are in a relationship, do these exercises together,” says Shapiro. “Use this as a chance to appreciate each other. Acknowledge one another for their contributions over the past year. And jointly choose a theme that you want to pursue together in the next year. This helps ensure that you are playing the same game, regardless of your individual interests.”

5. Remind yourself of your theme. “This is a simple compass setting,” says Shapiro. “It does not dictate a specific outcome and does not imply a particular path or plan. Write your theme on a Post-It Note and stick it on your computer screen. Write it on your bathroom mirror. Put it anywhere as a quick reminder to what you are about at this moment in time. Resolutions are things to do. Themes are a way to be.”

6. Remain open to new possibilities and to changes in direction at any point in the future. Finally, concludes Shapiro: “Themes are not set in stone. If the theme you chose is not working, feel free to change it. Themes are designed to help you experience life more fully. You should never feel constrained or limited.”