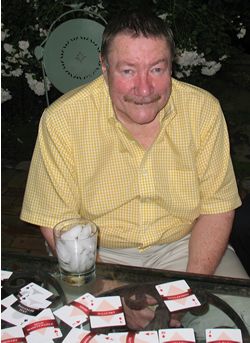 Last night, I held a launch party for my Personality Poker at the home of Robert and Joan Parker.  OK, actually the party was planned a while back (I bought it at a charity auction) and it just coincidentally fell at the time when the cards were officially released.

Robert B. Parker, is the author of dozens of books, including the Spenser series (which was the basis of the 1980’s TV show, “Spenser: For Hire”).  I have been a HUGE fan for so many years; this was truly an honor.

One of the party attendees said it so well: “I was like a boy from the Bronx around Babe Ruth. Robert Parker’s writing has now been in my life for so long. As long as he’s writing there’s always a moment of joy to anticipate.”  So true.

Joan Parker is an incredible woman with many talents.  Lately she has been focusing her energies on raising money for a number of non-profit organizations.  She is truly one of the most generous and down-to-earth people I have ever met.

Our party was at capacity with 20 friends, family members, clients, and colleagues in attendance.  It was a pleasure to have Liz Walker, a Boston news icon, there as well.  You may recall that I was on her TV show back in 2006.

Joan and Robert, thank you for sharing your home and your time.  You were both incredibly gracious.  It was a night we will all remember.

P.S. Robert’s book, “Appaloosa,” is being turned into a blockbuster movie starring Ed Harris, Renée Zellweger, Jeremy Irons, and many other big names.

P.P.S. Sadly, since this blog entry was written, Robert Parker passed away.  He will be missed by all of this loyal fans.

Click here to see some pictures from the event.