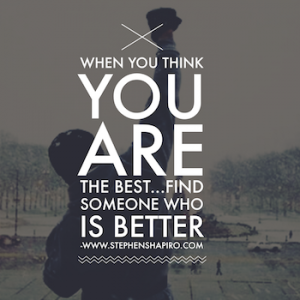 Back in 1993, I started speaking. At the time I was a consultant with Accenture (then Andersen Consulting). By the mid 90’s, I was speaking 50 to 100 times a year at company and client events around the world.

Invariably, after a speech, people would line up to shower me with accolades and acknowledge my speaking prowess. It became commonplace for me to hear that I was the best speaker they had ever heard. As time progressed, my confidence began to swell – and so did my head.

Given all of these accolades, in 2001, I decided to branch out and become a full-time professional speaker.

After doing this, I discovered something shocking. I wasn’t as good as I thought I was! (watch the video below to see what I mean)

While speaking for Accenture, audiences were comparing me to internal consultants, partners, and industry experts. While these people exhibited varying levels of abilities, none were professional speakers. And neither was I. But compared to them, I was a rock star.

And now, when I look back at video footage of my old speeches from my Accenture days, I want to cringe. My speaking business struggled in the early years, because in reality, I was not the best.

Since then, I’ve seen what a great speaker really looks like. Not only are they content experts, they are masterful at story telling, speech flow, and audience engagement. I did not realize this when I first started my speaking career.

No matter what your profession, if you want to be valued and hired, you need to have a good barometer for determining your aptitude. A skilled tennis player may appear great against a local club player. But if you want to play at Wimbledon, you’d better compare yourself to Serena Williams.

Just because you are a better speaker than someone in your local Toastmasters group does not mean you can make a living as a professional speaker. Just because your mother loves the book you wrote, does not mean it will be a New York Times Best Seller (or deserves to be).

Compare yourself to those better than you. Over the last 15 years, I’ve surrounded myself with people who are world-class speakers. Although I have my own style and approach, I now have an appropriate barometer with which to compare myself. This forces me to stretch. It highlights my weakness and blind spots. I like to be inspired and influenced by those who are better than I am. And I try to avoid beating myself up for not being as good, although I am not always successful.

It is wonderful when you are told you are the best. It is a nice ego boost. But be critical of these comments. When you think you are the best, you are doomed. There is nowhere to go but down.

Remember, there is ALWAYS someone better than you!

P.S. In honor of Throwback Thursday, here is a video of me speaking to 2,000 people back in 1999 while at Accenture. It was to an internal audience, so admittedly there are acronyms and expressions used that would not be understood by most people. Enjoy! (8 minutes)