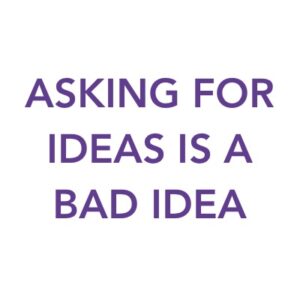 This is tip 3 from Best Practices are Stupid.

I love this one. It’s core to so much of my innovation work. The concept of the SIGNAL-TO-NOISE RATIO is overlooked yet critical.

A large European retail bank that was suffering from eroding market share thought they had a great idea to solve this emerging problem. They decided to get input from all their employees with ways to improve and grow the business. To collect employee ideas, they implemented an enterprise-wide electronic suggestion box. They believed that this would help them tap into previously undiscovered innovations. Sounds like a great idea, right? Wrong!

They received thousands of ideas. Evaluators looked at every one and, in the end, none were implemented. The company’s entire innovation program lasted a total of 18 months at which point it was shut down and deemed a huge failure.

In an attempt to be more innovative, many companies start by asking their employees for their ideas. This is a bad idea! The ideas that are submitted tend to be impractical and of low value and end up only creating an overwhelming amount of unproductive clutter in the system.

This points to one of the most important, yet under-considered measures in the innovation process: the “signal-to-noise ratio.”

The signal-to-noise ratio is an engineering term that is used to quantify how much a signal is corrupted by noise. For example, in an audio recording, the signal is the music and the noise is any background hiss. A higher ratio indicates more signal than noise, which is the ultimate goal. Many online discussion forums use the term to describe the ratio between useful information and spam or false/irrelevant information.

This latter use of the term is the one that best applies to innovation.

In innovation, the signal is comprised of solutions that are implemented and create value. The noise is made up of all of the ideas that never come to fruition, and the useless suggestions for problems that don’t matter and don’t create value.

To increase your innovation’s signal-to-noise ratio, the first thing you want to do is stop asking for ideas.

[NOTE: Although there is much more to this tip, I primarily wanted to highlight the signal-to-noise (SNR) ratio. I suggest all of my client use the concept to evaluate the efficiency of their innovation efforts. Another way to think about the signal-to-noise ratio goes back to the days of cassette tapes.. I would read the SNR ratings. Regular tapes would have the worst SNR whereas chromium dioxide would have a better ratio. Less hiss, more music.)