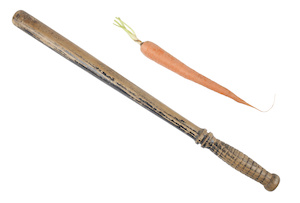 The answer to this is not cut and dried. Both work in different situations.

However there is some interesting research that shows one method tends to yield better results when it comes to changing particular behaviors. This may give us insights into how to motivate people to change/innovate within organizations.

One particularly difficult behavior to motivate is weight loss and health. Company wellness programs have incentivized people to get healthy by giving them “rewards” for achieving their goals.

But is this the most effective strategy?

A recent 13-week study of 281 overweight/obese individuals (published in the Annals of Internal Medicine) tried three different motivation strategies to see which would get people to walk 7000 steps per day:

Each gave an equal financial return over the course of the study. But they were not equally effective.

Which was most successful in motivating people?

The third method was most effective, with 45% of the daily targets being hit. The first and second approaches yielded 35% and 36% respectively. The control group was 30%.

So the carrot (a positive reward) did improve behavior, but not as much as the stick (a loss for not reaching a target).

I’ve seen this in my own life. I recently decided to get life insurance where rates are determined by, amongst other factors, my weight. The loss of money, in the form of higher premiums, has motivated me to get into better shape before the mandatory physical. In the past, getting money to lose weight rarely was a sufficient motivator.

A Washington University study provided similar results, where people were more likely to change behaviors when subjected to punishments.

You can read the details of the research method. The results are what I find interesting, yet not surprising.

The larger the rewards, the more consistent the desired behavior. (Although not mentioned, I suspect that there is a point where an overly substantial reward would have a deleterious effect – see my article on The Performance Paradox)

With losses, the amount did not matter, there was a strong and consistent behavior. In fact, losses drove 2 – 3x the impact over gains.

According to the study’s lead author, Jan Kubanek, PhD, “Objectively, you’d think that winning 25 cents would have the same magnitude of effect as losing 25 cents, but that’s not what we find.”

The article points out that this might be used in education. They suggest that in “some situations it may be better to deduct points when students are wrong than to reward them for correct answers.”

What can we learn from this as it relates to innovation?

Although I suspect we can’t give people money and then deduct their pay when they fail to achieve a goal, the concept could be used in various bonus situations.

For example, many innovation efforts use a points system to reward people when they develop valuable solutions. (I discuss some motivation strategies in an earlier article on the topic)

But to flip it on its head, it might be interesting to give everyone an allotment of points (or money) to start and then deduct points for inactivity or lack of contribution. If you have no points, it is boring to see an account that does not accrue. But if you start with one million points (or a set of bonus dollars), you might want to take action to prevent a loss of those points. That is, of course, if the points are valued by the individual.

I’m sure there are many other applications for this concept. I used some in the development of the gaming engine for my 30-Day Innovation Challenge.

Where else have you seen “loss” as the reward mechanism?

* A play on “his bark is worse than his bite,” just in case that was not obvious…which I suspect it wasn’t 🙂