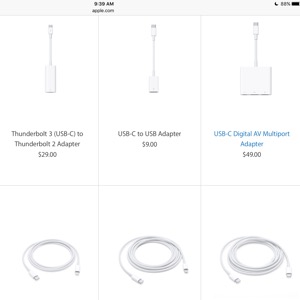 [see update below] I received my new MacBook Pro 13″ the other day. I was both excited and hesitant. I’ve had my old 2010 unibody MBP for a number of years and it has served me really well. I maxed out it memory and added a 1T SSD. It is great and relatively fast for a 6 year old computer.

Did I really need a new one? What about the lack of ports that aren’t USB-C? I read that a number of  people returned their new MBPs because of what is called “donglegate” – the need for adapters to convert old devices to work with the new Mac.

Given these concerned, I ordered my new Mac and it arrived last week and I’ve had a chance to play around with it. Here are my observations…

Overall verdict: If you have a newer MBP retina, then the upgrade is probably not worth it. But if you have an older, heavier (unibody) like I do, it is a nice improvement in terms of speed and weight. It has the portability of the MacBook Air with the processing power I need for video and audio editing. Would upgrading to an early 2016 retina be a better option? Maybe. But I guess I am not fan of spending a ton of money on hardware that is not the best specs. I got mine with the fastest/largest everything you could.

Some are suggesting people get a Microsoft Surface Pro. I’ll admit that is a great machine. But I have two iPads and an iPhone and love the seamless connectivity between the devices.

What are your thoughts?

Update Jan 20, 2017: Yesterday I returned my new Mac. The battery life I was getting was about 4.5 hours. Not quite up to the 10 hours they promised.  I brought the machine in to see if there was anything they could do to increase battery life. While diagnosing things, they found there was a hardware problem with my RAM. They suggested I return the machine and get a new one. I figured, if I have to rebuild the computer once again, I would wait until they worked out some of the bugs before getting a new one (there are rumors that a new one will come out the 3rd quarter of this year). My decision was more than just battery life. I really didn’t like the keyboard. Clicks too loudly. So the Mac is back and so is the monitor. To be clear, the dongles were not a factor at all in my decision. And I liked the Touch Bar (and the Touch ID in particular). Given this, my plan was to wait until next year to get the latest and greatest. But my buddy Robbe Richman strongly urged me to get the 15″ older retina version. So, on his recommendation, I ordered one and will play with that for a while and decide if I will keep that. I will update this once again after I play around with that machine.

UPDATE Feb 13, 2017: I am writing this on my 2015 retina 15″ MacBook Pro. After using this for a few weeks I decided it fits my needs perfectly. I love the older keyboard. And it is plenty fast.