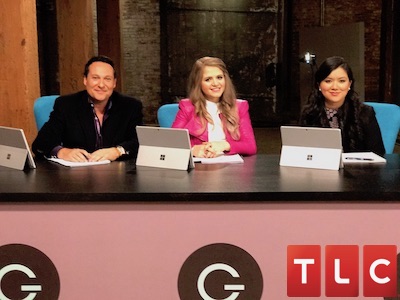 I was invited to participate in the new television reality series, Girl Starter, to mentor young women in launching their businesses. The show pairs eight “girls”, ranging in ages from 18 – 24, into 4 teams. Each team develops a new idea from scratch and goes through the process of planning it, validating it, and launching it. All of this was done over a 6-week period, with $100,000 being awarded to the winning team to put toward the development of their business.

As I write this, the second of six episodes just aired where I was featured as a mentor and judge. I was brought in to share my 30 years of experience with these young woman. And while I was able to provide an insight or two, I feel like I was the one who learned the most from this inspiring experience. (below you will find a brief video clip where I and co-mentor Tiffany Pham provide our two cents)

Although filming is completed and the winner determined, there are four more episodes left to air. With this in mind, I share my observations in a way that will continue to keep you in suspense.

Having been part of the show during weeks 2, 4, and 6, I had the opportunity to see the evolution of the business plans. Some teams were headstrong and opted to not listen to the advice of the mentors. Some teams made very few adjustments from day-to-day and week-to-week, while others made massive shifts. Those teams that were open to learning and adapting were deemed as the stronger businesses by the judges. Additionally, those teams that listened to potential customers and pivoted accordingly, rather than being headstrong, performed better.

The show’s producers did a great job of bringing in girls with a diverse range of personalities, experiences, and interests. Some of the women were more artistic. Others were more entrepreneurial. And others were more technical. It was fascinating to see that experience and technical competence were not always helpful. Past experiences sometimes interfered with their ability to think more creatively about their businesses. Or in some cases, technical knowledge led to solutions that were leading edge yet overly complex.

Throughout the show, teams pitched their businesses and ideas to the judges. In addition, most weeks had mini-challenges (e.g., Visa, a show sponsor, had the girls work on a new payment device concept) that they needed to present. As a judge, I focused on which ideas/businesses had the greatest potential. However, it was amazing how the pitch influenced the perception of the business. Pitches that were emotional and created visual images in our minds fared better than the ones that were “just the facts.” Our reality is shaped by stories and can influence our behaviors. Decisions are not always rational.

Some teams were all over the map, attempting to appeal to everyone. Although this may appear to create a larger base of buyers, it typically leads to a less successful start-up. The ideas with wider appeal seemed to be watered down solutions and ultimately less attractive. The ones that were more focused on specific demographics or only solved a limited set of problems for a target group were deemed as more valuable in the minds of the judges. This was evident in week two where the winning team had initially started with a much larger vision but pared it down to the most viable aspect.

Only one team could win the $100,000. It would be easy for the losing teams to pack up their bags, go back to their lives, and call it quits on the business. Without giving away the ending, I can tell you that none of the girls did this. I am writing this one month after the winner was chosen, and all eight women are still actively involved in developing their businesses. Even in the face of defeat, they are still committed to their dreams.

These insights are the tip of the iceberg and it is my pleasure to present to you this first in a series of articles garnered by observing the hearts, grit and determination of these young ladies. It is clear that the opportunity to learn is an ageless phenomenon.

Be sure to watch Girl Starter Friday nights, 7PM ET on TLC. You can also catch past episodes online at https://www.tlcgo.com/girl-starter/ or on-demand.

Here’s a short clip where we provide out advice to the Girl Starters: