If your head is filled with images of Olivia Newton-John jumping around in leotards and donning a headband, please re-read the title.

This article is not about exercise but is focused on the “phygital” movement; the blending the physical and digital world.

In life, most trends swing like a pendulum. For most of history, we were a physical society. Then as technology become more accessible by the masses, we’ve moved to a digital world. More and more, people are disconnected from the real world and spend their time on their phones, tablets, and computers.

More meetings are going online via Skype and TelePresence. More companies are allowing employees to telecommute. More people are spending time with their friends on Facebook and Snapchat.

But the pendulum appears to be swinging towards the middle. As we become increasingly detached from the physical world thanks to technology, people are now beginning to crave face-to-face human interaction.

Hence the emergence of the new phygital movement. This is the blending of the physical and digital worlds.

One simple and fun example I love is the Twizzard.  During Black Friday weekend in 2014, Mall of America® , used Twitter to power a snowstorm inside the Minneapolis-area retail complex. The more people tweeted with the #twizzard hashtag that weekend, the lower the temperature got on a digital thermometer in the center of the mall. When there were enough tweets and the temperature hit freezing, the skies opened and it started to snow INSIDE the mall.

This generated massive buzz through social media and increased foot traffic 10% over the previous year. You can watch a 30 second video showing it in action. (This is a shortened video. If you want to see the entire video, go here.)

I recently heard of another use of phygital. Normally if a customer complains on social media, if the company is savvy, they will send a quick response back via social media. But one major airport took this a step further. If there was a complaint about something related to the airport, based on geolocation and the person’s social media picture, airport staff would seek out the individual and give them some chocolates. Very cool. However I do wonder if this increased the number of made-up complaints by traveling chocoholics.

Of course more and more retail stores are using phygical as a means of engaging customers and increasing sales. iBeacons and other technologies allow the store to push coupons, alert shoppers of sale items, remind people of products they might need, and provide useful product information. Phygital experiences may be what is necessary to combat the growing threat of Amazon and other online retailers.

What do you do that is phygital? 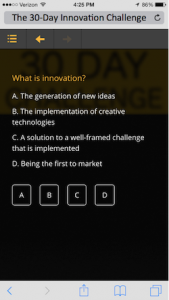 I even have a phygital offering of my own. My 30-Day Innovation Challenge was originally designed to provide a reinforcement of my content after people left my speech. But one use that has been wildly successful is to use the technology while people are still together.

For example, when I do a daylong workshop, we set up the system so that at the first break everyone gets the first of 30 questions. During the break people are encouraged to respond, because the leaderboard is displayed when people return.  People love seeing their name high on the leaderboard and it creates a sense of friendly competition in the physical world enabled by the digital world. We do this several times throughout the day, with the game continuing after people leave the workshop. When we start the 30 Day Innovation Challenge with a phygital experience, we’ve had over 95% of people participate each and every day for the remainder of the competition.

The physical world can enhance the digital world and vice versa.

Where are you seeing the blending of the physical and digital worlds? How can you bring this concept to your organization?

P.S. This will be the first of many articles on this topic.