One week from today, my 6th book, Invisible Solutions, will be released.

I’ve been asked, “How long did it take to write the book?”

The answer is, “It depends.” It depends on how you look at it.

December 2 – 10, 2018, I locked myself in a hotel room and started working on the book. Although I left the hotel with the first version of the manuscript, it took a lot longer to write than just one week. In fact, upon reflection, the book took nine years to write and publish. Hopefully this article will serve as inspiration (and education) to others who want to publish a book. Enjoy!

March 2011: I submitted the final manuscript to Penguin for Best Practices are Stupid. It covered a wide range of topics related to innovation: strategy, organization structures, measures, technology, and more. One  particularly important topic was the need to ask better questions. Although I addressed why this was critical, I realized I never give readers specific tools on how to do this.

April 2011: Almost immediately after submitting the manuscript, I conceived the concept of a “Challenge Toolkit.” The idea was to create a database of “lenses” that would help people reframe their challenge statements. The database would be supported by flashcards, videos, and an expert system. The intention was to create a product that would enable users to master the process of asking better questions, taking what I did naturally and systematize it.

May 2011: I created a spreadsheet cataloging a number of lenses. Over time I added to it, collecting dozens of them. The list grew over time. Admittedly, some were better than others. 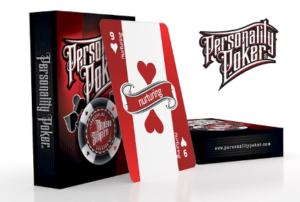 January 2012: Although I planned to fully develop the Challenge Toolkit in 2012, it got sidetracked by other ideas that launched that year, including my 30-day Innovation Challenge, new branding, a new website, and a Personality Poker® revamp.

May 2013: In an attempt to kick start the toolkit again, I shot two dozen test videos. Each video described a lens from the spreadsheet. To this day, these videos sit unedited in a folder on my Mac.

June 2013: I started conversations with a client who expressed interest in co-building the toolkit. After doing consulting work with them for nearly a decade, they wanted a systematic way to replicate the work I did for them. Unfortunately, after great initial interest on their part, and many months of conversation, an organizational restructuring put a halt to discussions. 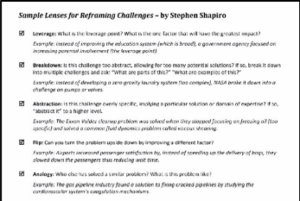 January 2014: I decided to take the work done to date and create a “product” to use with my clients. This is when I created my “Challenge Lenses Cheat Sheet.” This 2-page pdf that summarized 20 of the lenses. This document became a core piece of my client work as it codified the challenge-reframing work I had been doing for years. I also started pulling together details for each of the lenses in the hopes that I would eventually create a book based on it. It would take another 5 years before that would happen.

December 2018: I checked myself into a hotel for a weeklong deep dive. I decided it was time to write the book. I started by pulling together writings from everything I’d done in the past, including the lenses cheat sheet, articles, blog entries, and my “database” with examples of each lens. I also gathered a number of videos I created over the years and had them transcribed. In one week, I organized, wrote, and edited the first – and very rough – version of the manuscript. Everything was written in Scrivener.

January 2019: I hired a developmental editor who reviewed what I had written. She suggested ways to better organize the book and identified the major gaps in the content.

February 2019: After major reworking based on the feedback of the developmental editor, I sent the book to a copy editor and we did two rounds of edits. This took about 6 weeks of back and forth.

March 2019: With the book editing now complete, I imported the content into Vellum (a Mac-only software for book interior layout). During this period, I also worked with others on the title, subtitle, and cover design. 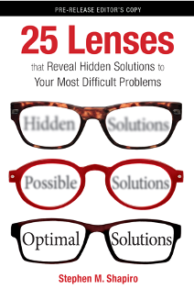 April 2019: On the first of the month, the files were sent to the printer. The first 50 copies of 25 Lenses was produced. These were sent to past clients and other reviewers for their feedback. The initial feedback was so positive that I decided to take the book to the next level and looked for a publisher. Because I wanted to have complete control over the project and needed to retain all intellectual property, I decided that a hybrid publisher (vs a traditional publisher) would be the best option.

May 2019: This month was spent gathering feedback and talking with a dozen hybrid publishers. In the end, I decided to work with Amplify (an imprint of Mascot Books). I liked the quality of the books they created for other authors and they came highly recommended by colleagues.

June 2019: The month started with inking the arrangement to move forward with Amplify. Although the contract was signed, before moving forward with the publishing process, I wanted to gather more feedback to incorporate into the book.

July 2019: Once again, I locked myself in a hotel room for a week starting the 1st of the month. We agreed on the title Invisible Solutions (thank you Adam Leffert). I also worked hard on the manuscript, incorporating all of the feedback I gathered from the reviewers of the 25 Lenses version. Finally, it was time to bring in Amplify’s copy editor.

August 2019: This month was spent primarily on book editing. The process took about six weeks to get most of the work done.

September 2019: After trying many different cover designs, my friend John Brunswick provided an eye-catching version that was pretty close to the finished version. By mid-month we were done with the edits and it was time for layout. I saw a few books that Amplify had done in the past and loved their work. Interior color accents make the book pop. And a pull-out would be a great way to incorporate an updated version of the cheat sheet I developed back in 2014.

October 2019: This month was spent primarily reviewing and updating the interior. By the end of the book, the book was pretty much done. Off to the printers!

November 2019: My focus moved from the book creation to marketing. Also, I started to put more energy into the supporting tools for the book (again, thank you Adam Leffert). The original vision of the Challenge Toolkit was starting to take shape.

December 2019: More focus on marketing and tools. Pre-orders on Amazon.com started December 3. Mid-month, I went to Chuck Gallagher’s Primeau Productions studio in Greenville, SC and read the entire book in front of a green screen (this will be used for both the audio and video books). And then on December 31, I received a nice New Year’s present: the first 100 copies of the finished version of the book.

January 2020: We are still focused on marketing and tools. This month’s marketing focused heavily on video. Fei Wu has been running YouTube instream ads with great success. And now that the videos are coming in from Chuck, we started using those for marketing. Check out a very cool one at www.baggageclaimstory.com

February 2020: This month was spend preparing for the launch. We edited videos. Posted videos. Bombarded social media with content. We worked on the audio book and the e-book. Now we are only days away from the official launch.

Thank you to everyone who has contributed to the book. There are too many people to mention. This was a truly collaborative effort. I am so proud of this book and I know it will make a huge impact to any organization that applies the principles and tools within.